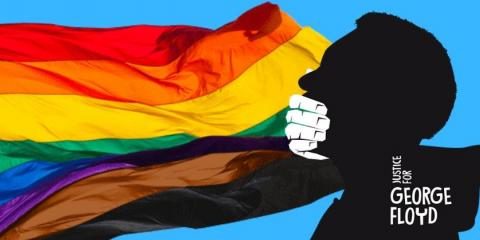 As you know, Mr George Floyd, Mr. Ahmaud Arbery, Ms. Breonna Taylor, Mr. Tony McDade, and Mr. David McAtee were recently murdered by their local police forces. As we mourn this brutal loss of life, we are also witnessing the expression of intergenerational and historical trauma in many of our communities, as people rise up for justice and Black liberation. These are complex, enraging, and saddening times. We want to acknowledge that we, our colleagues, our clients, and our communities are impacted in different ways depending on how our bodies are racialized and our position within the geo-socioeconomic strata.

We want to make it clear that the Queer and Trans Advocacy Network is on the side of justice and Black liberation.

We believe we are at another critical turning point in history. Our Black friends, family members, colleagues, and neighbors have withstood centuries of violence and oppression and are once again fighting back. We stand in solidarity with them and ask that all our white and non-Black members do the same. Talk to the other white and non-Black people in your life about structural racism and racial justice. Seek out anti-racist resources for yourself. Call elected officials and police chiefs and insist that they meet the demands of protestors and end violent police culture. Attend protests if you can. Care for those who are protesting. Donate money to support protestors and bail funds if you are able. Find the Black voices who are telling us exactly what they need us to do, and LISTEN and AMPLIFY them.

We understand that we have our own work to do, both as individuals and as an interest network, and we are committed to and prioritizing this work. If you are looking for support in your own anti-racism work, please reach out to us.

May we liberate each other. May there be justice and peace. No one is free until we are all free.

Previous PostKnow Your Rights: SC Equality
Next PostHRC President Alphonso David on the Launch of...