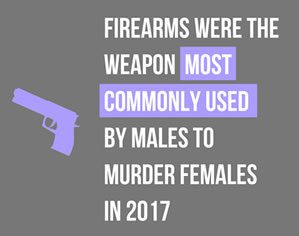 AGE
For homicides in which the age of the victim was reported (52 homicides), 4 victims (8 percent) were less than 18 years old, and 7 victims (13 percent) were 65 years of age or older. The average age was 39 years old.

RACE
Out of 52 female homicide victims, 29 were white, 21 were black, and 2 were Asian or Pacific Islander.

CIRCUMSTANCE
For homicides in which the circumstances could be identified, 85 percent (29 out of 34) were not related to the commission of any other felony. Of these, 79 percent (23 homicides) involved arguments between the victim and the offender.